It IS Rocket Science

The elementary school STEM (Science, Technology, Engineering, and Math) Fair gave rise to future scientists in the Jetnasium on November 9th. Students dabbled in the scientific method, and older, more experienced contestants developed their research and experimentation skills with a new creative project, such as a miniature catapult. It was, in fact, rocket science.

Branching off of their class lessons, grade three chose from two possible topics: create a miniature catapult or a balloon-powered hovercraft. Evelyn in third grade said, “I made a ball launcher that could send balls far away, and chose this because I wanted to launch the ball furthest as possible, and it looked fun.” The kids formed hypotheses, took risks, and learned from their mistakes. They can start developing their own ideas the following year.

Fourth graders, being more experienced, chose topics from various categories. Fifth graders, in particular, are now qualified to participate in the SKAC STEM Fair. Five projects were selected from each category to represent DIS at an extended competition on November 22nd.

The return of an in-person event felt exceptional for students and teachers. Mr. Bartolay explained, “The STEM Fair this year was different from the previous year’s. Whereas in the previous year, we were much limited in what we could do because of COVID restrictions, but now that COVID restrictions have been weakened, we can host this event that interacts with all elementary students, where previously we had to do things small only within classes.”

Similarly, Ms. Son stated, “Apart from the big events this year, parents got to come in at the last 30 minutes of the event, and this is special as their visits were restricted in the previous years. As parents came in and saw the projects, we received a lot of positive feedback, and other people who came to visit, such as administrators, also gave us similar feedback and we are proud of them.”

Despite the outcome of the event, the process was not a cakewalk. Mr. Bartolay said, “For third graders, there were some difficulties for students to actually carry out the procedure as it is their first time to carry out the engineering process.”

Difficulties also stretched to other grades. Ms. Son said, “For 5th graders, it is different from other grades where they had to go to the SKAC competition after the school competition. Because GIFS was organizing the event, we had to follow their structures, which was complicated, and everyone had to figure things out. But despite some difficulties, our students went through well, and some students won awards at the SKAC competition.”

Olivia, from grade 5, won second place in her category, Earth Science. She said, “I talked about soil erosion, where I compared different soils and saw which one would be the best for the plant to keep its water, and I chose this topic because I wanted to try things that I was interested in and what others wouldn’t do as their project.”

The STEM fair presented a great opportunity for students to learn and experiment with various scientific phenomena outside of their school curriculum. More importantly, they pondered on innovative ideas. Purnima from grade 3 said, “I got to learn and try new things from this project, but I mainly had fun doing this project, and I want to do this again in the future.” Young thinkers moved along the path of scientific studies. Now all that’s left to do is to soar into space. 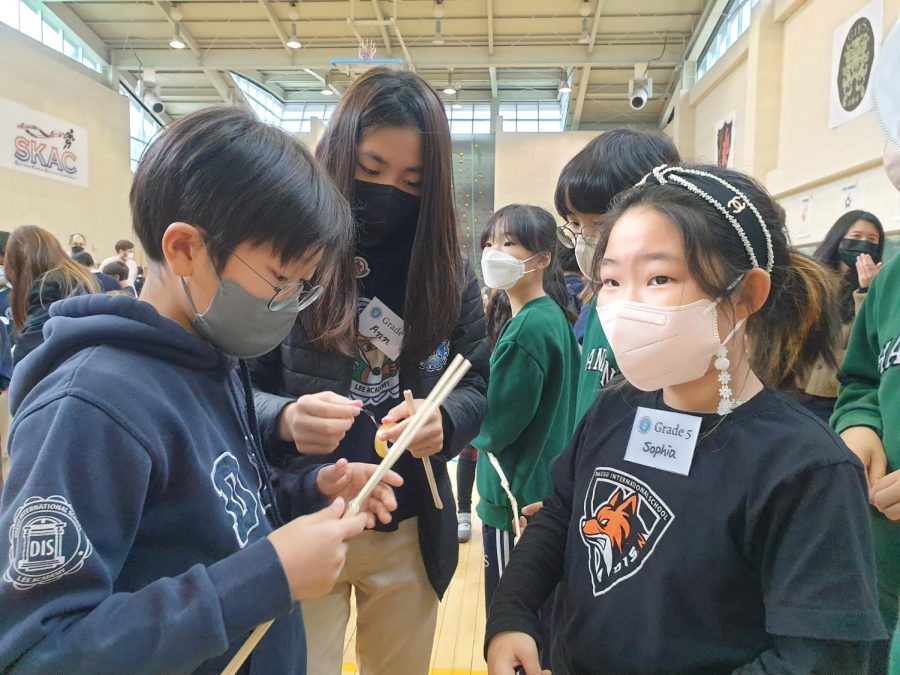 Gallery|8 Photos
Fifth graders tape chopsticks together to make a bridge for their experiment. Photo by Ms. Son.